Celebrating ANZAC Day has always been an important date of remembrance in Australia, not only honouring those who served but also celebrating the first time that Australian and New Zealand armed forces marched off to war in 1914
under their own flags, instead of that of the United Kingdom.

For Italy the twenty fifth of April is also a very important day as the country celebrates Liberation Day – the end of the Fascist regime and the Nazi occupation, the end of the Italian Civil war plus the victory of the Resistance movement. In both countries it is a public holiday and in all the large cities, smaller towns and hamlets it is a day of remembrance of those who lost their lives during both WW1 and WW2. 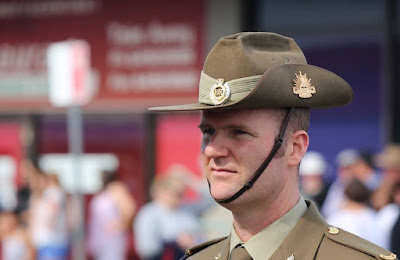 As a ‘new’ Australian child growing up in Perth, Western Australia, I remember learning all about ANZAC Day and the story of Simpson and his donkey and his amazing courage. Each year we were bussed to the War Memorial in Kings Park overlooking the Swan River. There we joined other schools from all over the metropolitan area and sang ‘God Save the Queen,’ listened to the ‘Last Post’ and heard speeches about bravery, loss and valour. 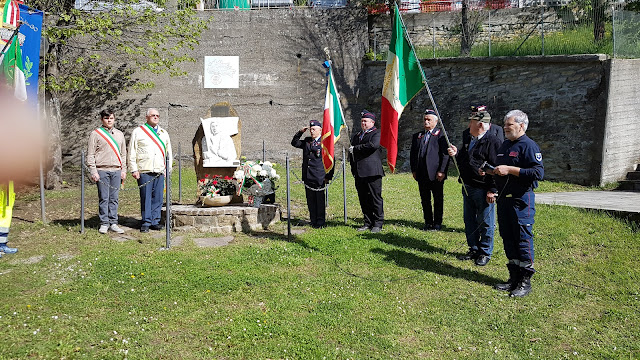 A lifetime later, now living in a small mountain town in the Apennines of northern Italy, each year we join in the annual Liberation Day celebrations. Each morning of the twenty fifth of April we assemble in the main piazza in Polinago to join former members of the Alpini and Carabinieri, along with the mayor, the junior Mayor who is an elected representative of the local primary school student council and other villagers to march behind military banners and a long Italian flag carried on either side by former members of the Alpini. We walk solemnly to a park at one end of the town where there is a memorial to a fallen Carabinieri soldier Salvo D’Aquisto. A wreath is laid at this memorial and, our elderly local priest Don Paolo recites a prayer, a representative from the Carabinieri gives a short speech, the Italian national anthem is sung (all the verses) and then the last post is played, followed by the laying of a wreath and the flags and banners are dipped.

After the service the priest leads the parade, followed by the large Italian flag and banners back through town to the main piazza where the mayor welcomes everyone and reads another speech, followed by the priest and then a wreath is laid on the memorial to the fallen members the community and once again the national anthem is sung, the last post played and the assembled crowd moves on to the church for a church service. 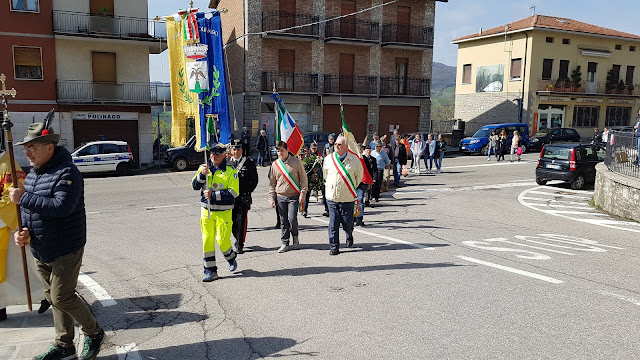 While the services are regarded as sombre and taken seriously, however, this is still Italy. Sometimes it is difficult to hear what is being said due to the number of animated conversations by onlookers taking place at the same time. The march is always somewhat shambolic and seems to appear to be disorganised. The national anthem is more like a three-part opera and everyone knows all the verses and sings along full voiced and it finishes on a rousing note with everyone say loudly “Si” and followed by clapping! 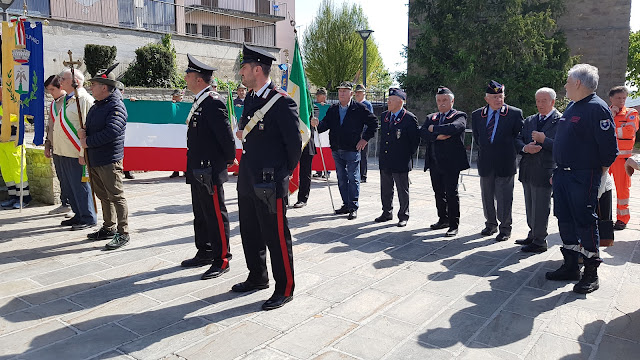 The Alpini is an army group established in 1872 to protect Italy’s northern mountain borders. Members are selected from the mountain regions only and all proudly wear the corps hat with its jaunty eagle feather on the side. Over the years most young men from Alpine regions were conscripted into the Alpini which created and automatic bond. Italy abolished conscription in January 2005 and today retired Alpini form the back bone of the Emergency Services and are regarded as being trustworthy and hardworking and are easily noticed as on occasions such as Liberation day they proudly wear their Alpini hat. 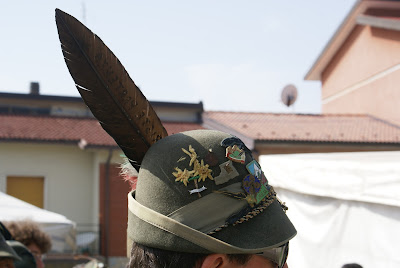 The former Carabinieri, although somewhat larger than they used to be, turnout in their smart uniforms and always a couple of current serving members attend resplendent in the dark navy, well pressed uniform with a red stripe down the side of the trouser legs and dark navy caps looking at their peak of sartorial elegance. The Alpini generally wear a particular colour of check shirt which varies from group to group. With their hats on, they are hard to miss.

If 25 April falls on a Saturday or Sunday generally a lunch or dinner is organised either at a restaurant or school sports hall for those wishing to attend. It doesn’t take long before the singing starts and it is wonderful to hear everyone singing heartily the songs of the mountains and the special songs of the Alpini.  Certainly plenty of wine along with the food is consumed, in Australia it would be beer and possibly a game of ‘two up’. 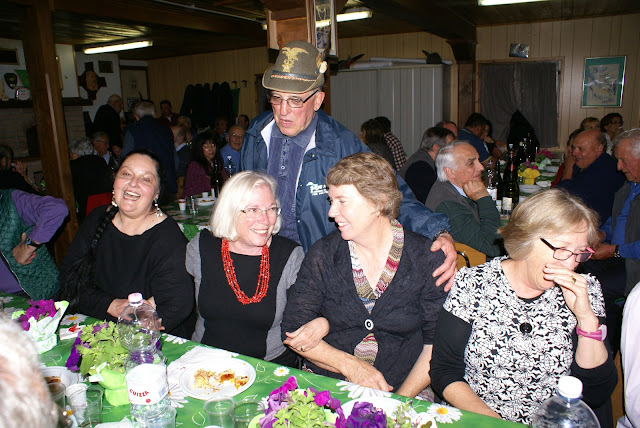 Popular posts from this blog

More about Truffles and Ricotta - What's There Not to Like? 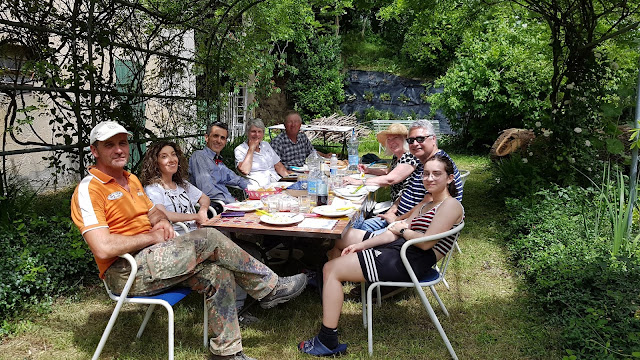 As we explore and learn more about the world of truffles, we are of course doing  a number of taste tests along the way. I must admit that a number of years ago when we first moved to Polinago,  I tasted a truffle mixture in a small glass jar, which I was given to use in the making of a frittata. From that time, I decided I didn't particularly like it that the taste was too pungent for my liking. However, I now realise that what I was given was a product which relied very little on the use of real truffles and more on so called infusion of truffle oil. This product is one which probably has price appeal to most members of the public, but very little to do with real truffles and more to do with the probable addition of an oil, which bears no relationship with an actual truffle and perhaps a scrape of truffle in it.

From The Mountains To The Sea 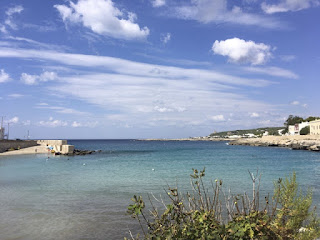 Make the most of your Italian holiday experience – an opportunity to experience the uniqueness that is Italy, two very different, yet personal visits to opposite ends of this enchanting country.


Stay with us, David and Winnifred, at Cherry House in Italy BnB in the Appennine Modenese, an hour from the elegant city of Modena in the region of Emilia Romagna. Savour the crisp, clear mountain air, the mountain foods and local wines. Then travel to the warmth of Puglia in the far south of Italy to stay with Valentina, at her late grandfather’s house, Casa dell’ Arte Veglia, in Salento, near the sea and the beautiful capital city of Lecce. Each location offers an opportunity to immerse yourself in distinctly different aspects of Italy, its local history, culture, foods and wines.
Located in the small town of Polinago, facing majestic Mt Cimone, Cherry House BnB offers a relaxed and quiet location with the opportunity to hike ancient paths, take leisurely walks along quiet country roads; learn…
Read more

The World of Truffles – a Unique Experience 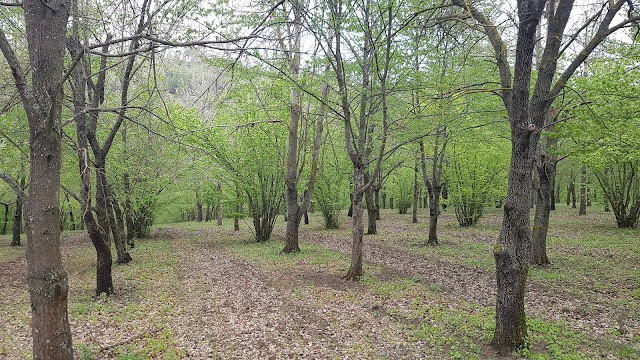 One of the joys of living in Italy is that we are constantly learning new things.

Over the past couple of months due to an enquiry regarding our property Casa Marzana (which we are trying to sell) we have been learning a great deal about truffles. Our PP (Prospective Purchaser) was interested in starting a truffle farm on our land and arranged to have soil tests done to assess its suitability for growing truffles. We became very involved with the process and certainly more knowledgeable. However, as much as we enjoyed surveying our property with the agronomist and observing how the soil samples were taken and seeing him continually shaking his head, it was not to be. Our soil, thick and full of clay is great for growing lush green grass- every cow’s delight, but it definitely is not suitable for growing truffles.
The friendly agronomist and his truffle expert companion suggested taking the PP to visit an existing truffle farm so that he could see for himself what a truffle farm is like …
Read more